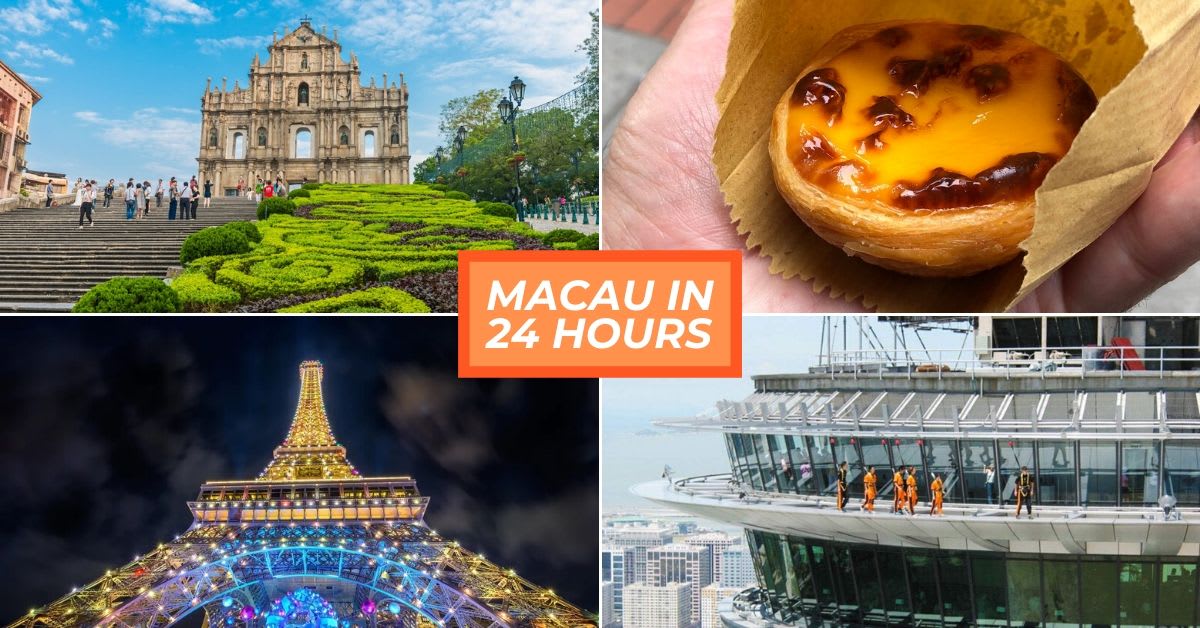 Macau – the Las Vegas of Asia

Just like its Western counterpart, visiting Macau is a fast and furious affair of culture, adrenaline, history and food that you can conquer in just 24 hours or less! More than just a day trip from Hong Kong and definitely more than its casinos, Macau boasts a handful of attractions that provide a perfect mix of culture and history.

And here’s how you fall in love with Macau in 24 hours!

1. Try the first egg tarts ever introduced to Macau 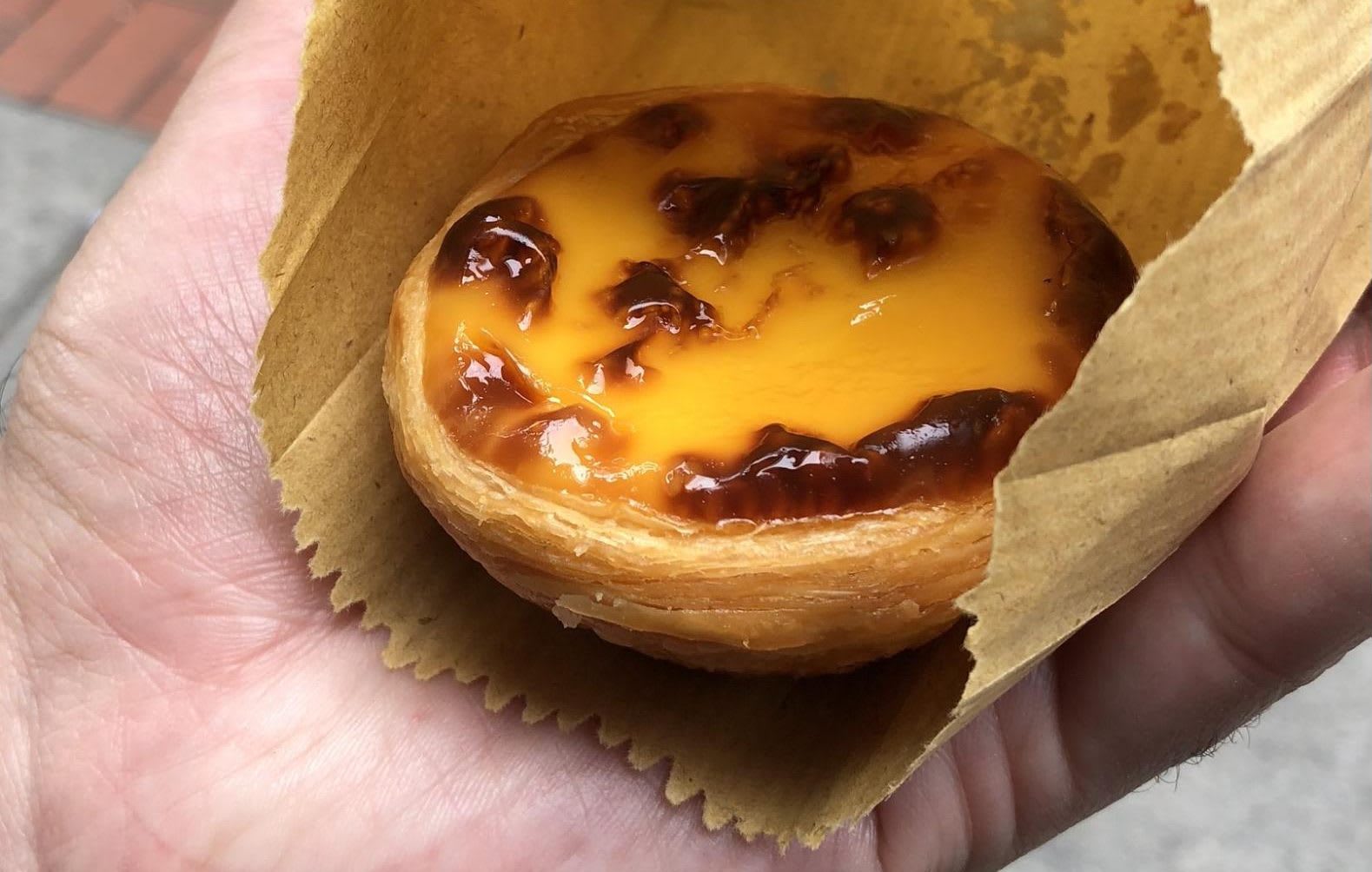 The Portuguese egg tart is everywhere in Macau, with multiple imposters professing theirs is the original, but it doesn’t get more authentic than the landing site of these delicious flaky pastries at Macau’s very own Lord Stow’s Bakery. It might interest some to know that the creator of the egg tarts Macau is so famous for is neither Portuguese nor from Macau!

Englishman Andrew Stow derived inspiration from the popular Portuguese Pasteis de Nata (looks pretty much like a smaller version of egg tarts as we know it) and came up with his own version that turned out to be a hit among the local community. Known for its decadent filling and light, fluffy pastry, this egg tart promises to put all other egg tarts to shame.

Pro-Tip: The locals know Lord Stow’s Bakery as Andrew’s Egg Tarts instead, so you’ll stand a better chance asking for the latter if you’re asking for directions or taking a local taxi. 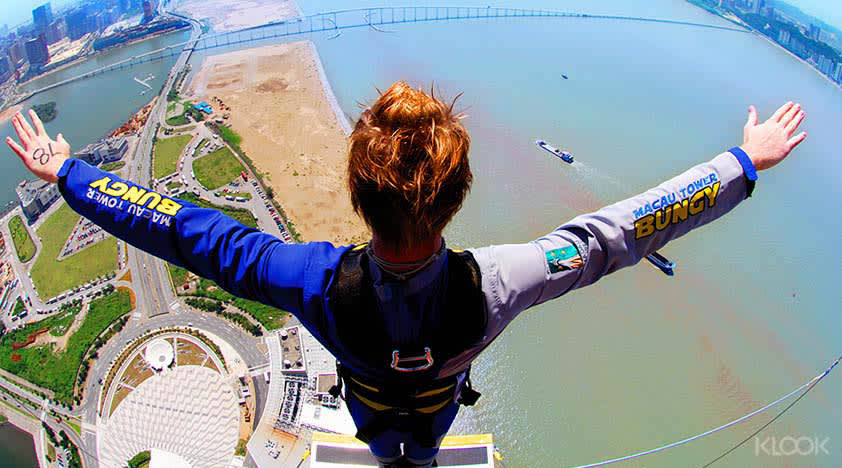 Imagine standing at the top of the Macau Tower, with nothing separating you from a 223-meter free fall into Macau City below. The moment you step off that platform, you’re firstly out of your mind and secondly, also part of a Guinness World Record!

The Macau Tower Bungy Jump has a tall reputation for being the world’s highest commercial bungy AND the 10th tallest freestanding building in the world. It’ll take a whole lot of courage to walk off that platform, but it will all be worth it (we hope)!

3. Or maybe just walk around it 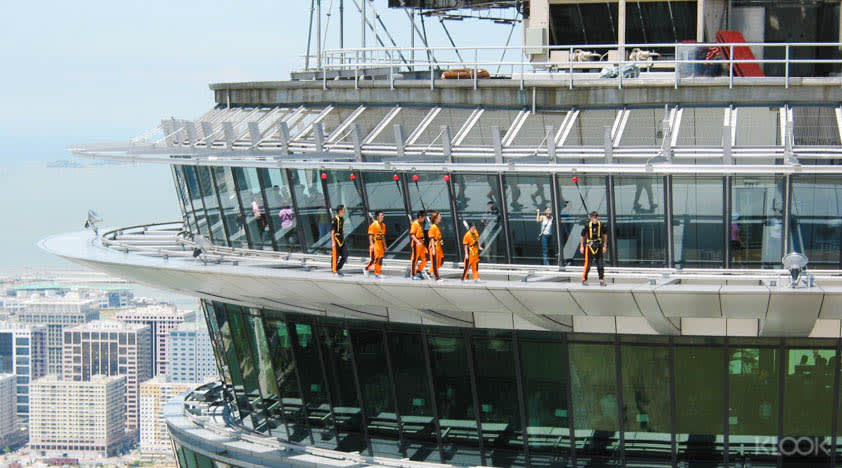 If you can’t bear to throw yourself off the top of the Macau Tower, you can still get your fair share of adrenaline by walking on it! Thrill-seekers don’t scoff just yet – the platform is only 1.8 meters wide with no rails whatsoever and the only thing stopping you from a 200-metre plunge to the bottom is a single cable. 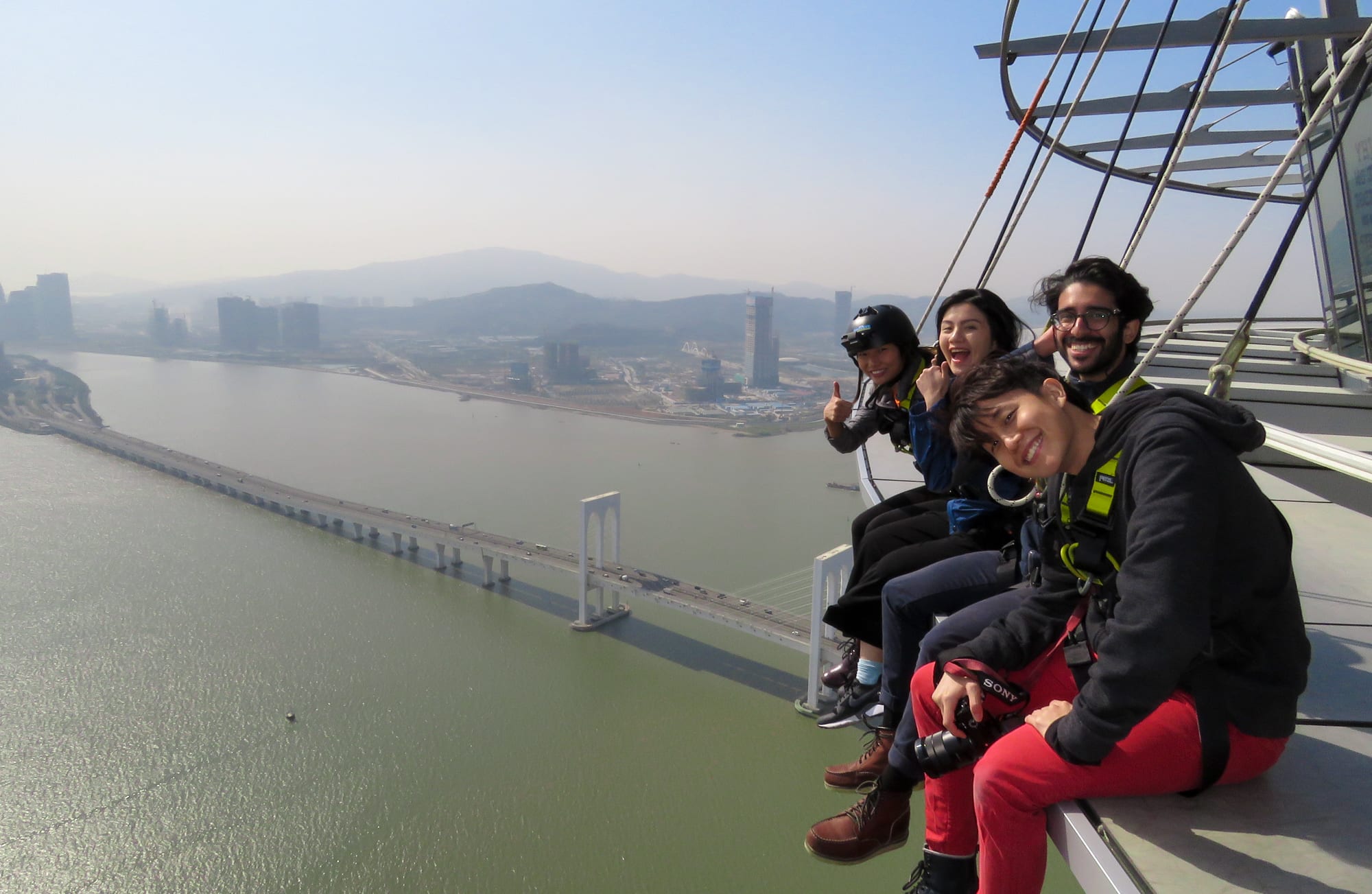 The Travel Intern hanging off the edge of the Macau Tower!

So be the adventurous traveller that you always are at this Guinness World Record-holding tower now! Also, after the 20-minute walk, you’ll receive a certificate as a form of a pat on the back for your bravery!

4. Have a pork chop bun with a recipe unchanged for 50 years 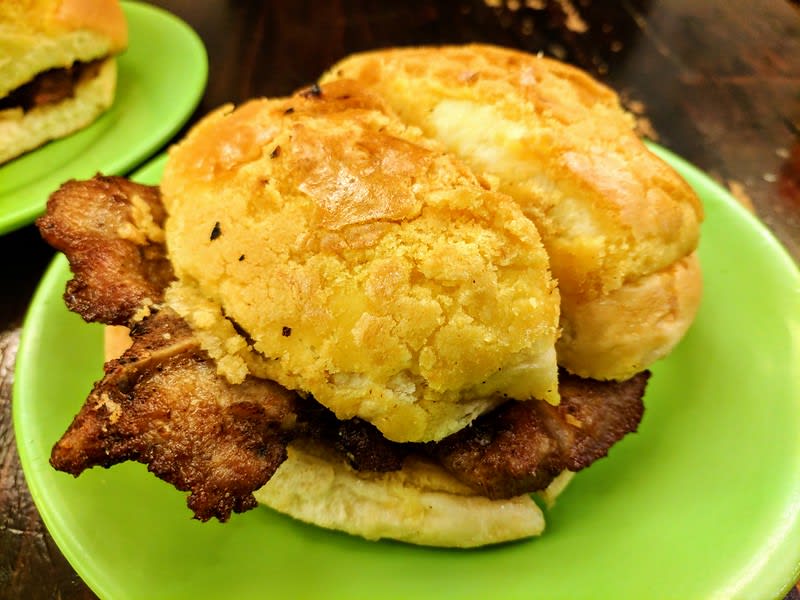 If you only have 24 hours in Macau you’ll need to make a beeline straight for the best, and when we mean best we mean pork chop buns made from a 50-year-old recipe out of an unassuming shop front.

Café Tai Lei Loi Kei is known for their succulent pork buns marinated a secret sauce from a recipe that hasn’t changed since it opened for business. Choose from a variety of buns including Each bun typically costs around S$5.80.- 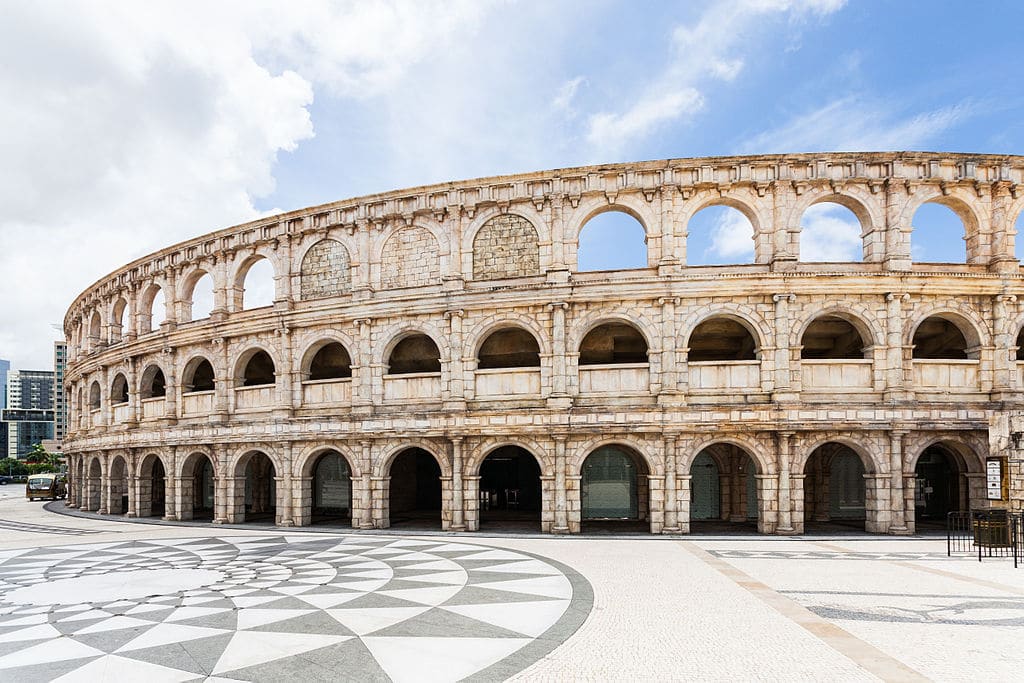 With a striking similarity to the Colosseum in Rome, this main attraction of Fisherman’s Wharf boasts every European feature that you can find in a typical Europe attraction, from the historical architecture to the alfresco dining options.

And of course, this place is absolutely Insta-worthy. In fact, a trip to Fisherman’s Wharf makes you feel as if you’re experiencing all there is to Europe (almost!) without having to even step out of Macau!

6. Hop aboard the Figure 8 Ferris Wheel 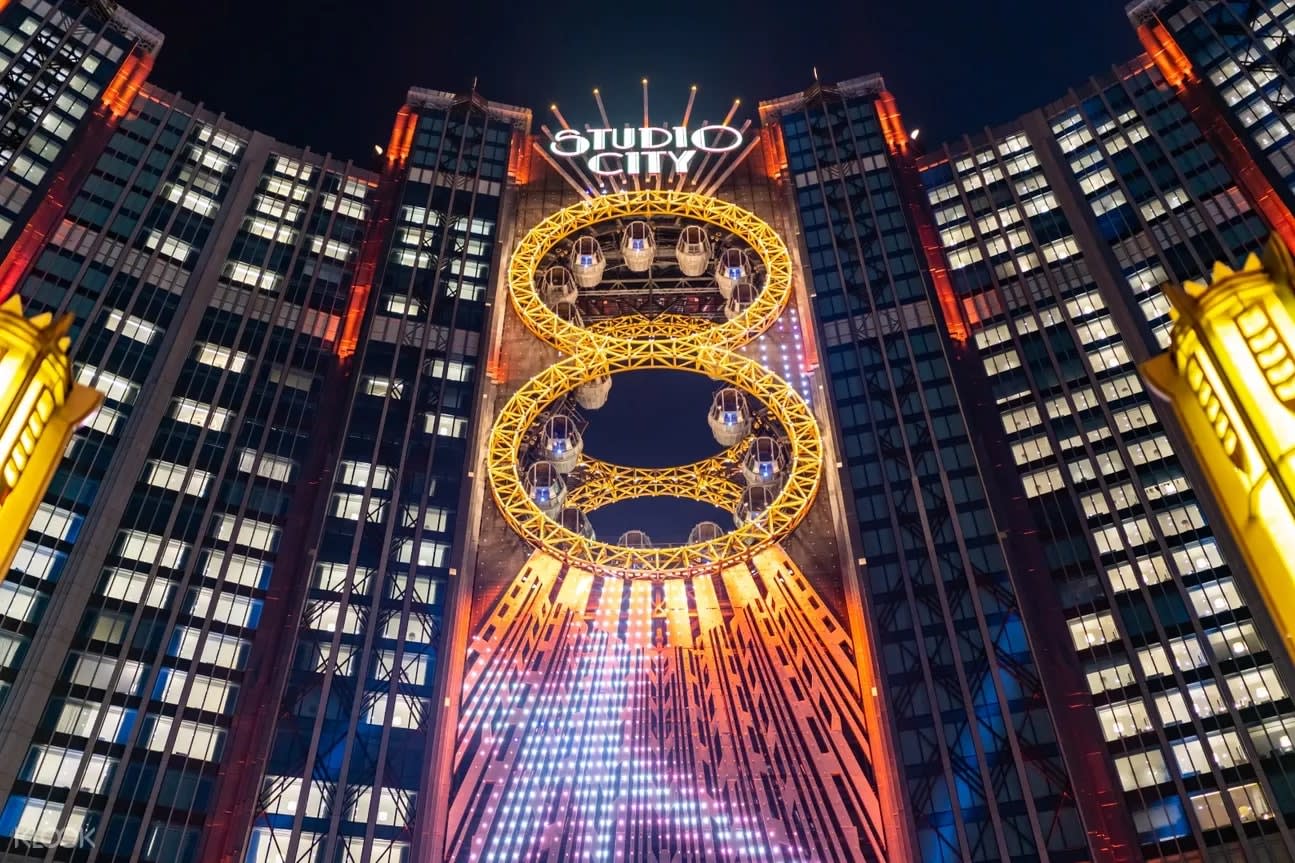 Of course, Macau, a Chinese country known for its casinos, is going to have an attraction that symbolises the number 8. In case you don’t know, the number 8 symbolises luck to the Chinese and here in Macau, suspended between the twin hotel towers of Studio City at 130 metres high lies the Figure 8 Ferris Wheel, also known as Golden Reel.

It’s like every other Ferris wheel except it rotates in the shape of the number 8. Once onboard any of the 17 cabins, you get to enjoy breathtaking views of the city that include the South China Sea at different points and angles of your journey!

Klook your ride on the Golden Reel ferris wheel

7. Enjoy the view from Macao’s very own Eiffel Tower 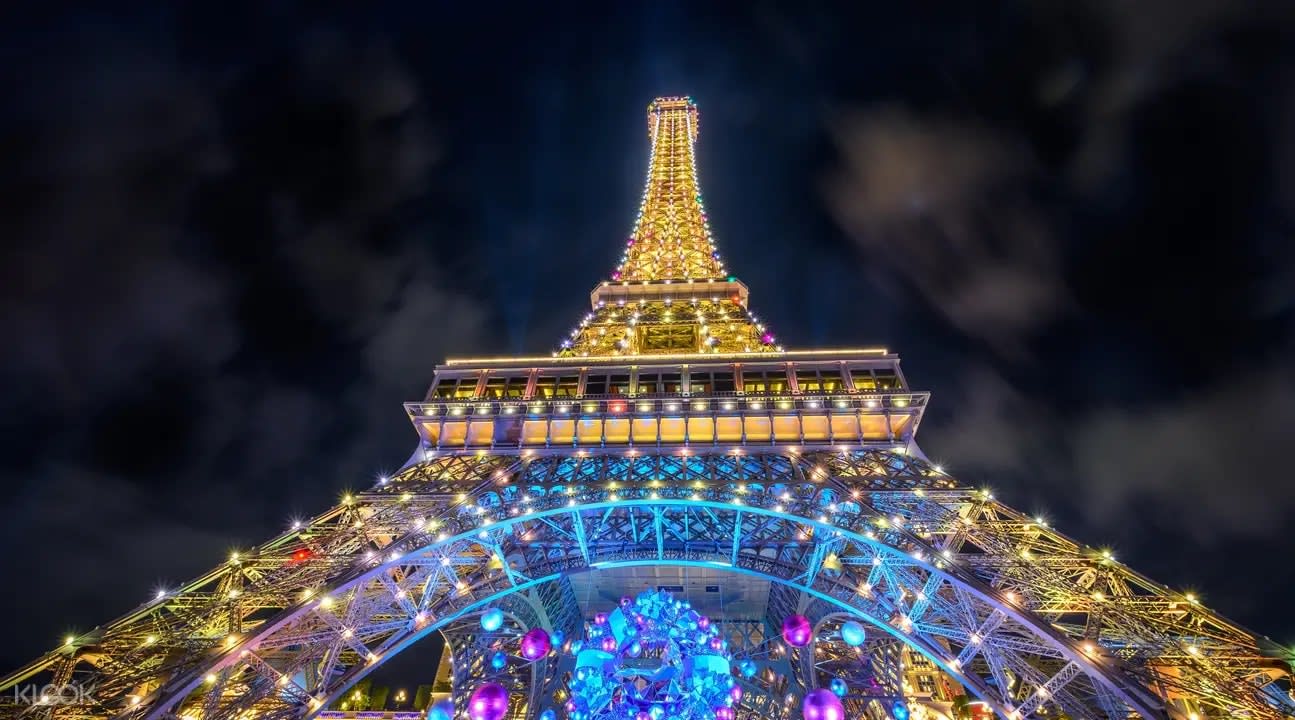 Take your very own Eiffel selfie at Macao’s new landmark at the Parisian Macao. Instead of just looking at it from the outside, why not get yourself a ticket to go up to the observation deck. When you visit in the evening, not only will you get a sight of the colourful lights of the Macau Eiffel Tower, you can overlook Macao as the city comes alive at night as well!

The tower has many of the ornamental touches that its counterpart in Paris has, making you really feel like you’re really in Paris. Perhaps Macao should be renamed to the Europe of Asia, rather than Las Vegas! 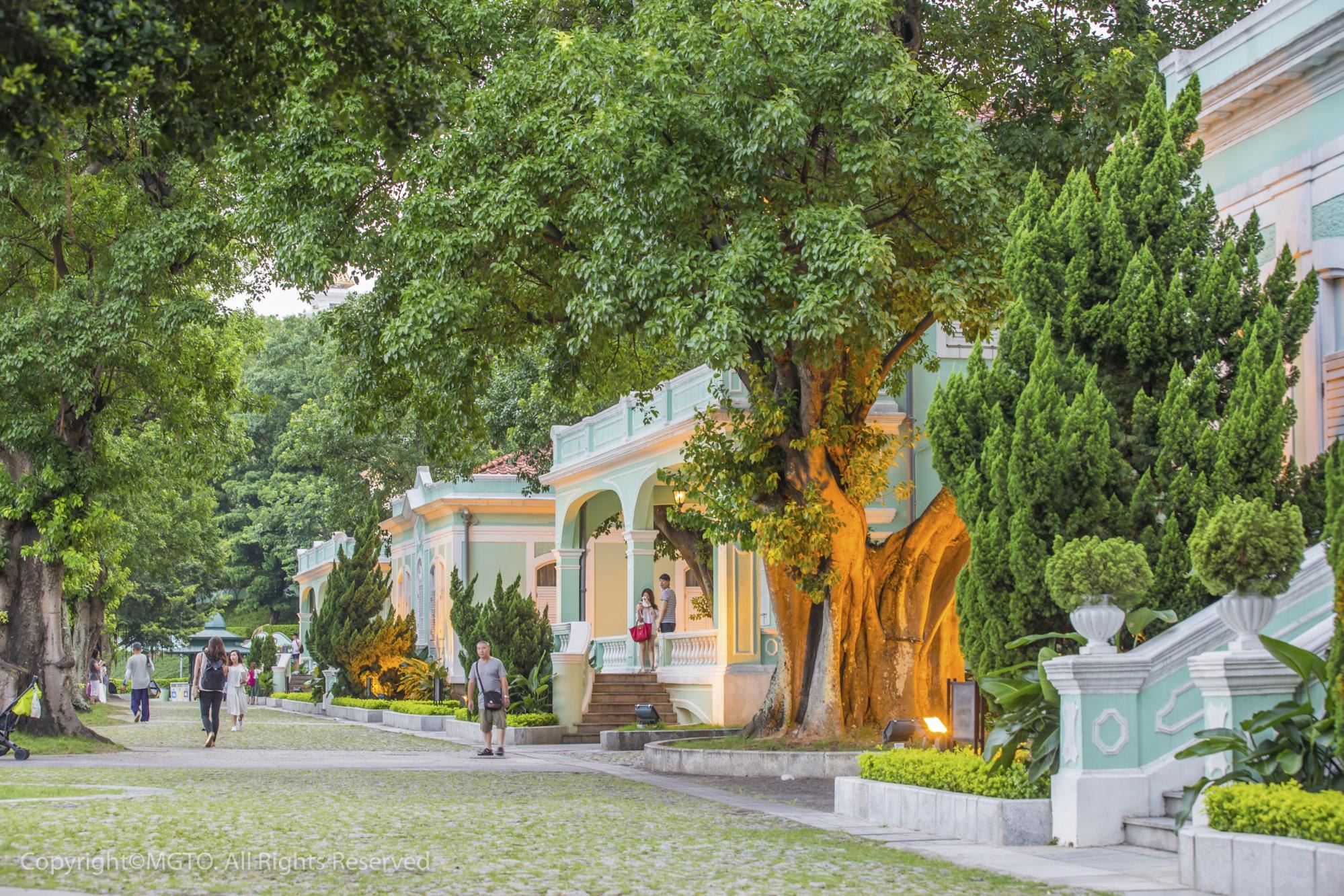 Soak in the old world charm at Taipa Village in Macau. Although not a village anymore, it’s often overlooked as a must-visit place when you’re in Macau. Donned with Europe-themed architecture, this lesser-than-known attraction houses a bunch of temples as well as two museums.

The museums here are definitely worth the visit. For one, the Taipa Houses Museum consists of a full row of houses from the early 20th century that have been preserved and restored, while still exhibiting the original living conditions of its initial owners!

9. Burn off all the calories from the egg tarts by going hiking 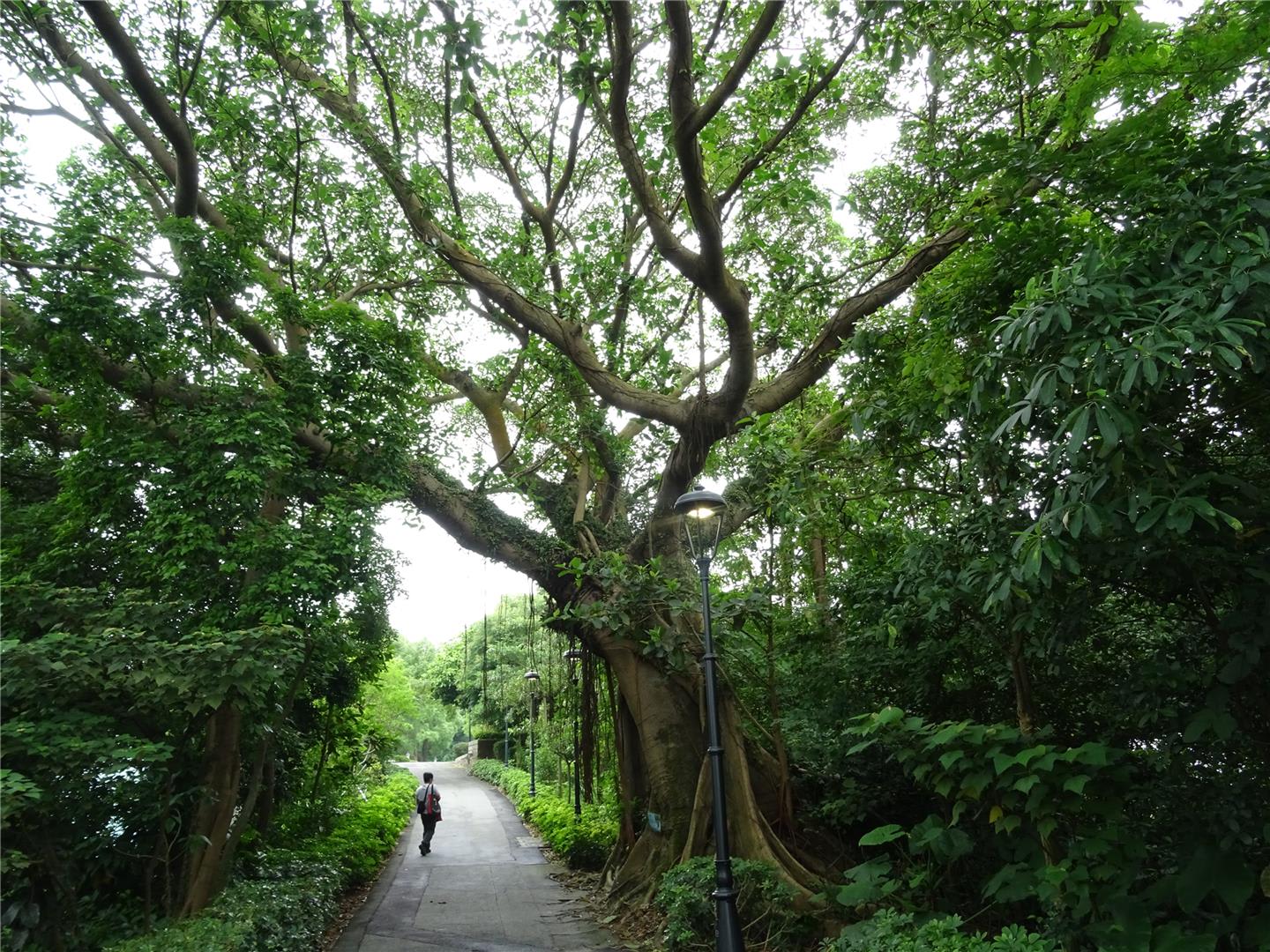 Of course, it’s impossible to forgo egg tarts when visiting Macau. So instead of feeling guilty indulging in this delicacy throughout your whole trip, we suggest dedicating a few hours of your itinerary to a scenic hike, right here in Macau!

For a small country, there are actually a few different trails that you can choose from, and all of them feature breathtaking views of the city as you go along. For one, the 4,000m Grand Taipa Hiking Trail offers views of the city at 159.2 metres above sea level, and don’t worry, because of its low incline, this hike is suitable for whether you’re 23 or 73!

The best time to hike would probably be towards the golden hour, so yes, you might want to wake up early for this one! For the full details of the different trails, click here. 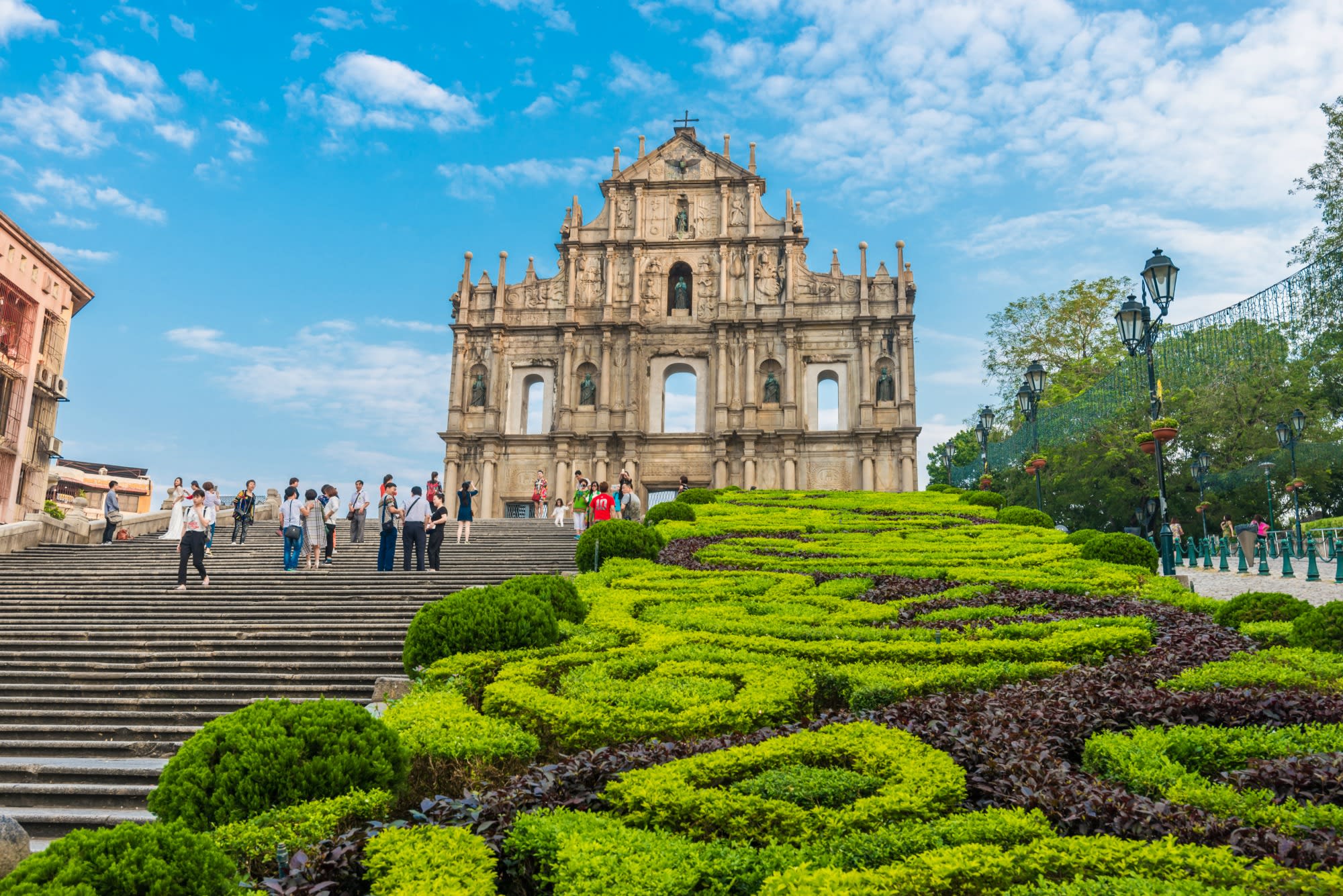 If you aren’t much of an itinerary expert and absolutely hate planning trips on your own, gravitating towards a day tour has always been a safe choice. Nothing beats a well-planned day not planned by you, right?

And because Macau is a small country in its own, covering some of its major attractions in a day isn’t all that difficult! From UNESCO World Heritage Sites of A-Ma Temple and the Ruins of St. Paul’s to the iconic Macau Tower and even a visit to a local restaurant, you’re bound to fall in love with Macau in no time! 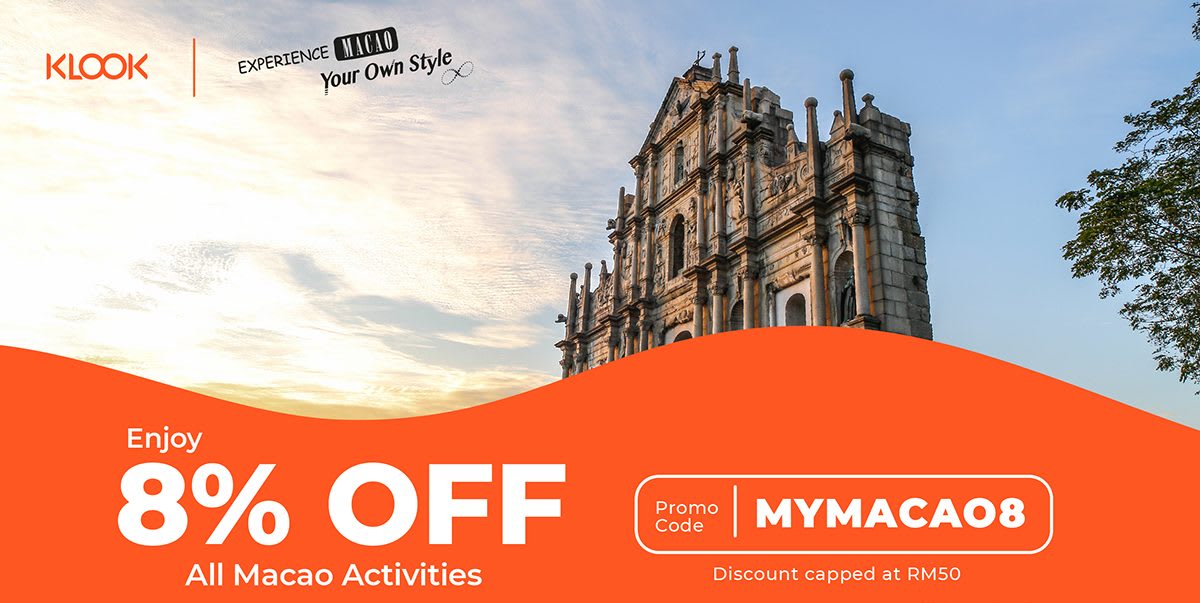 Good news for those travelling to Macao! Enjoy 8% off ALL Macao activities on Klook from now until 31 December 2019 with the promo code “MYMACAO8”. Check out the Macao promo page for the full T&Cs.

You don’t need long to explore and fall in love with a city like Macao! Take the day off and explore some hidden gems – you won’t regret it. Before heading to Macao, make sure you’re fully prepared and equipped with all your travel essentials like 4G SIM Card and WiFi Device so you can stay connected. If you are making your way to Macao from Hong Kong, remember to get your TurboJet Ferry tickets or the Macau Cotai Water Jet transfer. 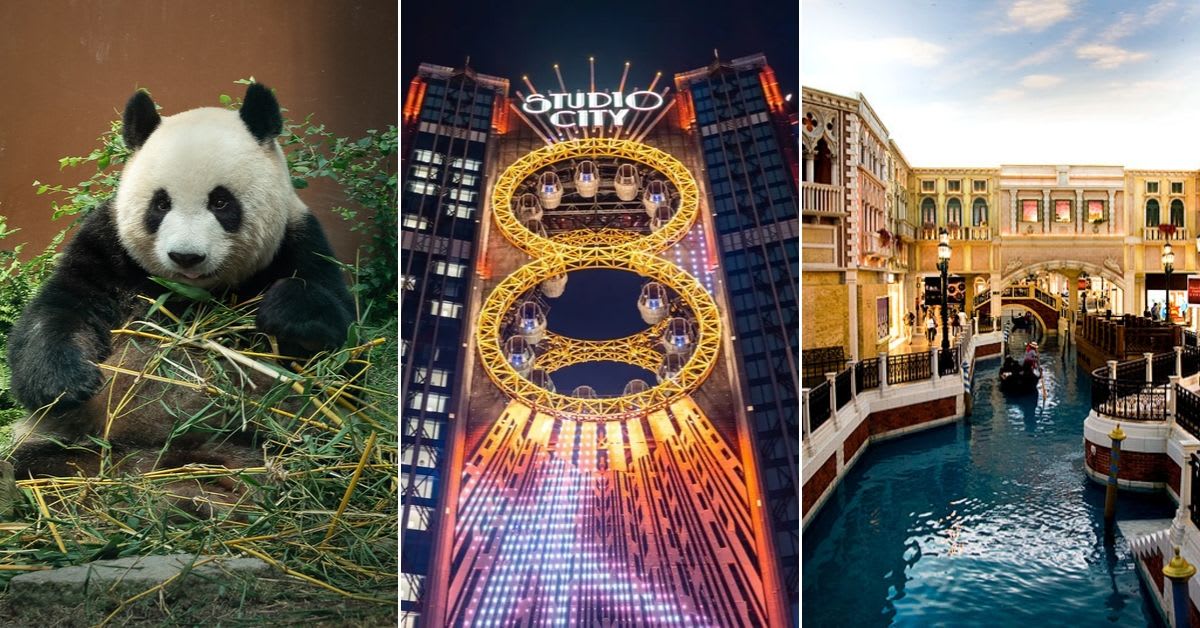 Macao With The Family – Things To Do, What To Eat, And Where To Stay
Rising as one of the top family destinations in recent years, why not plan for your next family holiday to Macao? Keep reading to find out what are the popular things to do, food to eat and places to stay in Macao!

10 Insta-Worthy Hong Kong Spots For Your Next Post
1 – 2 – 3, say cheese! Not only is Hong Kong home to tourist attractions like Victoria’s Peak and a buzzing nightlife scene at …

Unmissable Photo Spots All Around Ngong Ping Village and Lantau Island
Lantau Island is filled with stunning photo spots! From Ngong Ping 360 to Sunset Peak, here are the IG-worthy spots you can't miss! 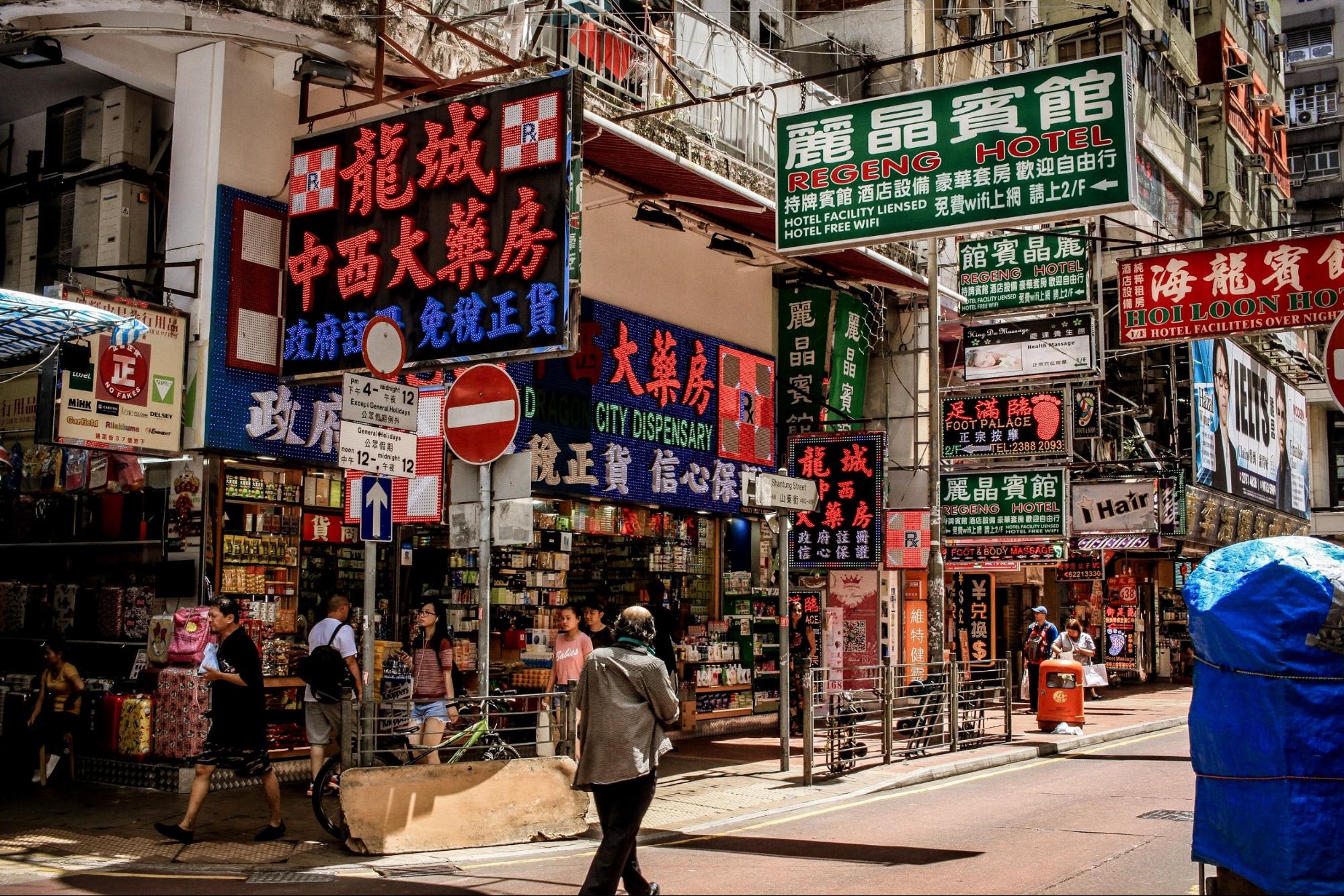 What To See, Where To Shop, And What To Eat In Kowloon, Hong Kong!
Hop on the Big Bus Tour and explore the city of Kowloon! From bargain shopping at Temple St to stellar views from Sky100 - here's your go-to Kowloon guide. 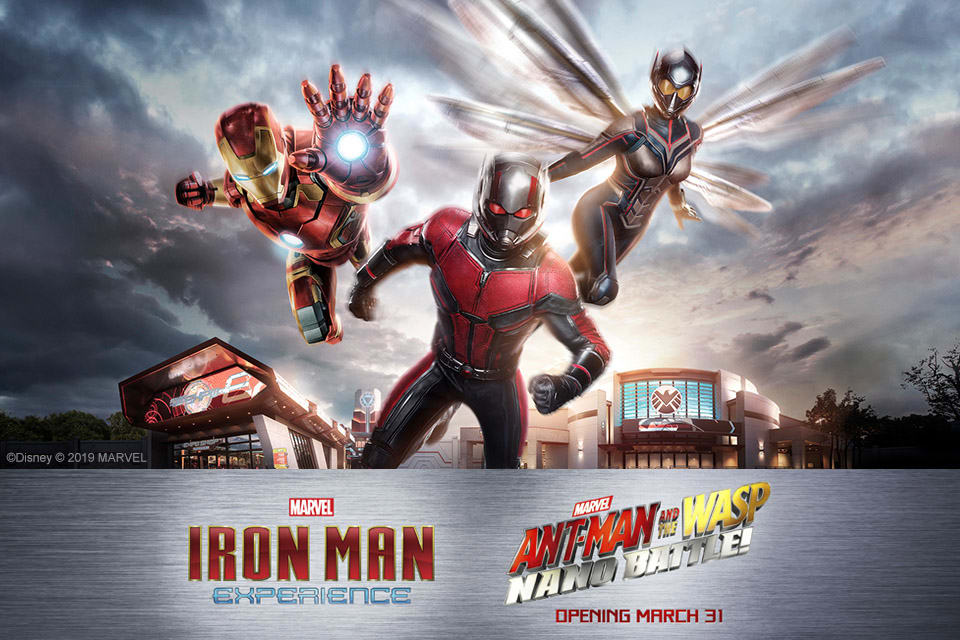 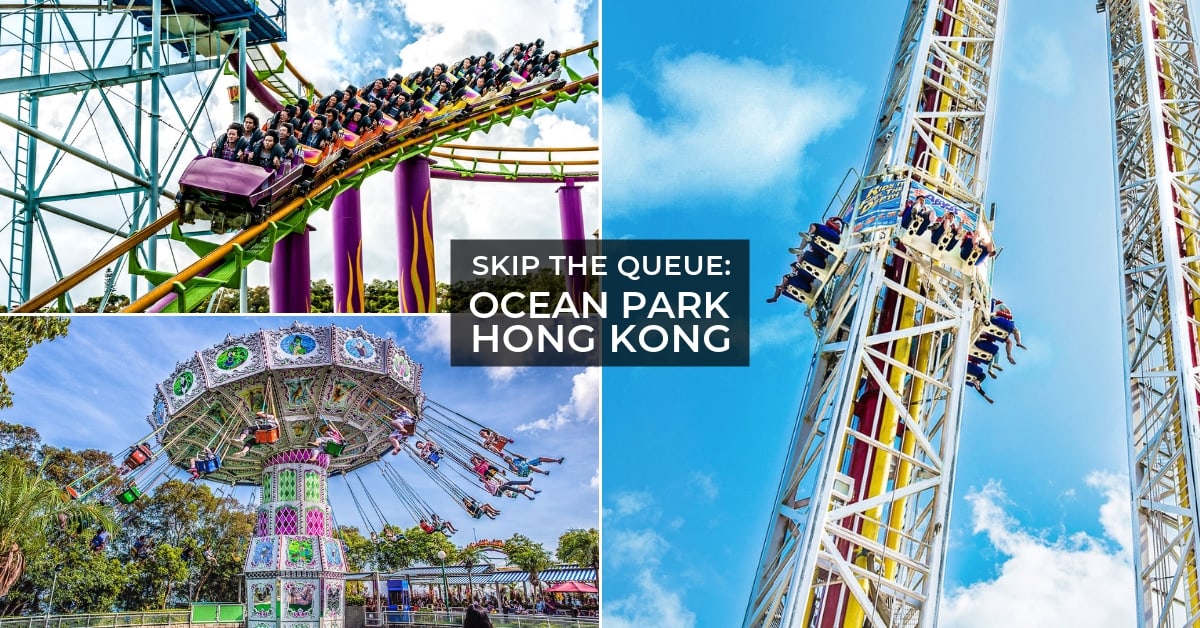